Moles are brown or black growths, usually round or oval, that can appear anywhere on the skin.

In order to understand mole removal it’s important to understand moles at the core. Moles are brown or black growths, usually round or oval, that can appear anywhere on the skin. They can be rough or smooth, flat or raised, single or in multiples. They occur when cells that are responsible for skin pigmentation, known as melanocytes, grow in clusters instead of being spread out across the skin. Generally, moles are less than one-quarter inch in size. Most moles appear by the age of 20, although some moles may appear later in life. Most adults have between 10 and 40 moles. Because they last about 50 years, moles may disappear by themselves over time.

Mole types and when to consider mole removal

Most moles are harmless, but a change in size, shape, color or texture could be indicative of a cancerous growth. Moles that have a higher-than-average chance of becoming cancerous include:

Moles present at birth. The larger their size, the greater the risk for developing into a skin cancer.

Irregularly shaped moles that are larger than average. They often appear to have dark brown centers with light, uneven borders.

BCCs are abnormal, uncontrolled growths or lesions that arise in the skin’s basal cells, which line the deepest layer of the epidermis (the outermost layer of the skin).

SCCs are an uncontrolled growth of abnormal cells arising in the squamous cells, which compose most of the skin’s upper layer.

People with 50 or more moles are at a greater risk for developing a skin cancer.

In some cases, abnormal moles may become painful, itchy, scaly or bleed. It’s important to keep an eye on your moles so that you can catch any changes early. We recommend doing a visual check of your body monthly, including all areas that don’t have sun exposure (such as the scalp, armpits or bottoms of feet).

Use the American Academy of Dermatology’s ABCDEs as a guide for assessing whether or not a mole may be becoming cancerous:

If any of these conditions occur, please make an appointment to see a dermatologist right away. Your doctor may recommend carrying out a biopsy of the mole to determine if it is or isn’t cancerous. From there the decision to surgically remove it will come in.

Surgical excision of moles is a simple outpatient procedure carried out in the office under local anesthesia. Occasionally, sutures are placed at the time of the excision, and these can be removed approximately one week following the procedure. 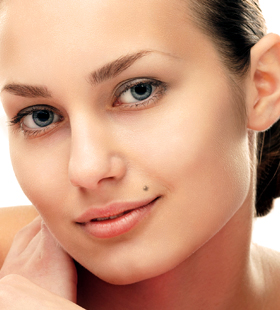 Or fill out the form to learn how you can look your best with Botox®, Juvéderm, Facial Plastic Surgery, Rhinoplasty or any of our services.

A member of our staff will be in touch within the next business day.

*We respect your privacy. To the extent permitted by law, we will not release your name, street address, telephone number or email address without your consent.